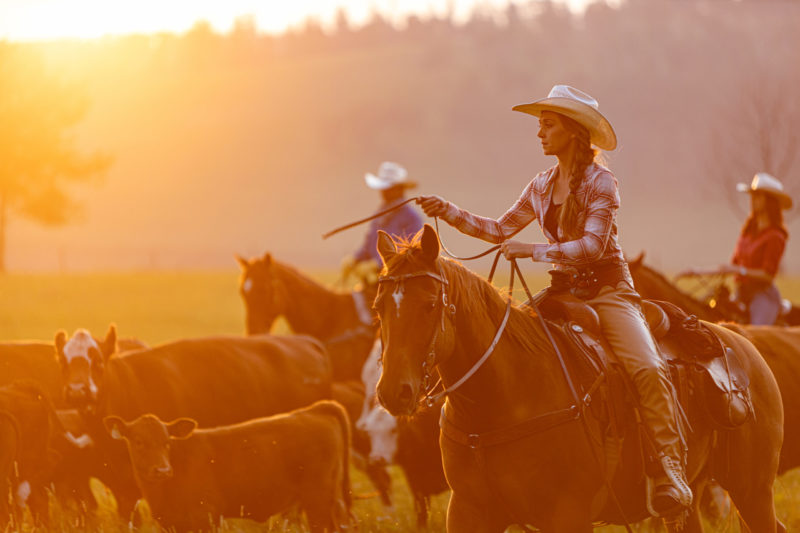 On being a part of “Heartland” for 15 seasons, she said, “It is pretty crazy. That is underheard of in the world of television.”

The streaming service UP Faith & Family is the leader in uplifting entertainment. It will be the first place in the United States that fans can watch the 15th season of “Heartland.”

“My character, Amy, is so similar to my daily life, and that makes her an easy character to play and prepare for. That has been really nice since my character works with horses and I have my own horses and my own farm so I almost get to prep for her journey every day of my own life,” she added.

Starting on March 17, the service will add new episodes weekly. Additionally, UP Faith & Family is the only place where fans can catch up on all prior seasons right now. According to a recent Nielsen report, Heartland was the fifth-most-streamed series in 2021.

“Heartland” is the longest-running one-hour drama in Canadian television history. It is set in the rolling foothills of the Rockies in the fictional town of Hudson, Alberta. While some journeys end, others are just beginning.

The Bartlett-Fleming family has learned a hard lesson: life is short, and you have to live each day to the fullest. In Season 15, they will put what they learned into practice. Last season, Amy Fleming (Amber Marshall) said goodbye to the past.

In this 15th season, Amy embraces the future — raising her daughter and working with the horses who continue to heal her while branching out into a new phase of her life and profession. She is moving forward and feels determined to leave a legacy.

In fact, Jack, Lisa, Lou, and Tim have all decided that now is not the time to pull back, but to ramp up, to create new dreams and fulfill old ones. And, as they always do, the family will pull together to help each other… and will ultimately end up stronger than ever.

On being an actress in the digital age, Marshall said, “It has really changed how we view television. When I first got into this industry many years ago, this was not something that was on people’s radar. Streaming now has become so popular and people would binge-watch season after season, and episode after episode. You get so invested with the characters, and the audience can come along on this journey with us.”

For young and aspiring actors, Marshall said, “This industry portrays a lot of glamour but there is really not a lot of glamour. It’s a lot of hard work and a lot of long hours sitting and waiting as well. You need to have pretty broad shoulders to be an actor. Go get experience and take as many acting classes as you can before you set your mind to it.”

If she were to go on “The Masked Singer,” she revealed that it would be “some version of a horse.” “That would make the most sense,” she said. “For myself, personally, if I could capture an animal in my whole being it would be some type of wild cat. If I look at the bigger picture, I encompass more traits of a cat.”

If she were to write, direct, and produce her own short film, she revealed that it would be in a “nature setting” with “no dialogue” and “no people in it.” “I might even get in a little science fiction here,” she said.

Marshall defined the word success simply as “being happy.” “For me, success has always been about accomplishing things to where I feel satisfied. Success is when you are happy and when you achieved most of the things that you set out to do,” she explained.

For “Heartland” fans and viewers, she remarked, “Season 14 was a very traumatic season, it had the death of a major character and my character [and all the characters] went through a season of grief and learning how to put the pieces back together. It was a very heavy season for all of us.”

“When I look at Season 15, this is the next chapter and the moment where all the characters decide to move forward with their lives. They need to be there for one another and they need to be strong for their own sanity too. You can’t live in mourning, loss, or regrets. Season 15 is very fresh and all of the characters find different ways to move forward to find happiness,” she concluded.