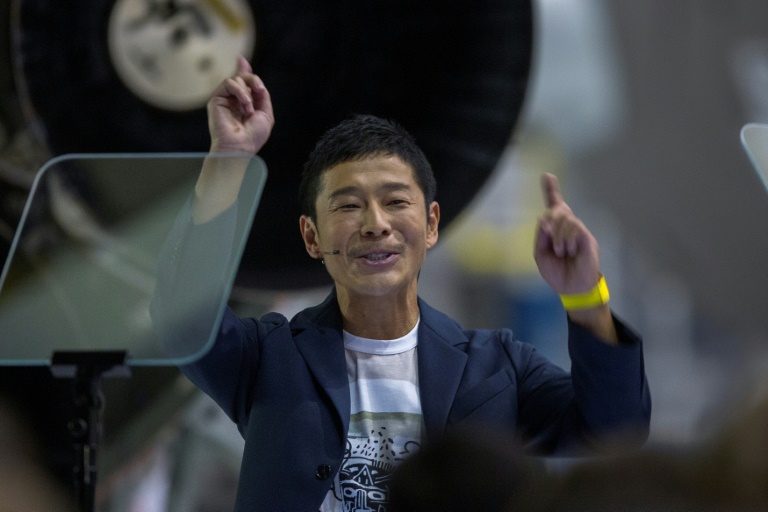 Billionaire Yusaku Maezawa, who will travel to the International Space Station as a tourist in December aboard a Russian spacecraft, is a former wannabe rock star worth $1.9 billion with a penchant for pricey modern art as well as space travel.

It will be the first time the Russian space agency Roscosmos has taken a tourist to the ISS since 2009.

He is known for his luxury living — including private jets, yachts and designer watches, but also his beloved art.

He made his fortune as the founder of online fashion store Zozo, which he sold to Yahoo! Japan in 2019.

Maezawa hit the headlines in 2018 when he was announced as the first man to book a spot aboard a lunar spaceship being developed by SpaceX, the Roscosmos rival of American billionaire Elon Musk.

He placed an online ad calling for a girlfriend to join him on the 2023 flight — only to abruptly cancel the hunt, despite attracting nearly 30,000 applicants.

His love of art became a focus in 2017 when he bought a Jean-Michel Basquiat masterpiece worth $110.5 million.

But he has also often featured in the tabloid glossies for his celebrity love life.

He used to date the ex-wife of professional baseball player Yu Darvish as well as Japanese actress Ayame Goriki.

The entrepreneur has a passion for modern art and splashed a record sum for Basquiat’s 1982 “Untitled”, a skull-like head in oil-stick, acrylic and spray paint on a giant canvas.

Maezawa founded the Contemporary Art Foundation in Tokyo and was on the 2017 list of “Top 200 Collectors” of the ARTnews magazine based in New York.

He has insisted he is just an “ordinary collector” despite his extraordinary bank balance.

His purchases are born out of love and driven by gut instinct, he has said, rather than the instructions of any art adviser.

“I buy simply because they are beautiful. That’s all. I enjoy classics together with the history and stories behind them, but possessing classics is not the purpose of my purchase,” he told AFP in an interview in 2017.

And rather than squirrel the work away, he has loaned it out to museums including the Brooklyn Museum, in Basquiat’s hometown.

“I hope it brings as much joy to others as it does to me, and that this masterpiece by the 21-year-old Basquiat inspires our future generations,” he said.

As a young man, Maezawa had aspirations in the music world and was a drummer with a band named Switch Style, which made its debut in 2000.

In an interview with corporate affairs website Nippon Shacho, he said he eventually discovered that the business world was more creative than music.

“We were about to become salary worker-like musicians,” he said, referring to the famous Japanese “salaryman” employees.

Even before the band’s debut, he was dabbling in business, founding Start Today, which operates online fashion shopping site Zozo, which he sold in 2019.

He said the company grew because he and his staff were “doing what we enjoy”.

“We love clothes, and we love our colleagues who love clothes. We are doing business as an extension of our hobby.”