Although small in size and population, the Echizen region has a long history of producing finely-crafted artisanal specialities, including Japanese paper — the renowned washi — as well as ceramics and lacquer ware that are highly sought-after in Japan and around the world. The fine art of making these products has been handed down from generation to generation for many centuries.

Echizen is particularly famous for its bladesmithing traditions. For more than 700 years, blade makers from Echizen and the surrounding Fukui Prefecture have been crafting superior agricultural tools, swords and knives that have been highly prized by everyone from farmers to samurai. Echizen forged blades claimed many lives in battle during Japan’s tumultuous medieval era. But in the 14th century, Kuniyasu Chiyozuru, one of Japan’s most revered swordsmiths, dreamed of creating blades, made from the best steel available, to be used for creative rather than destructive purposes—the “ultimate tool.” 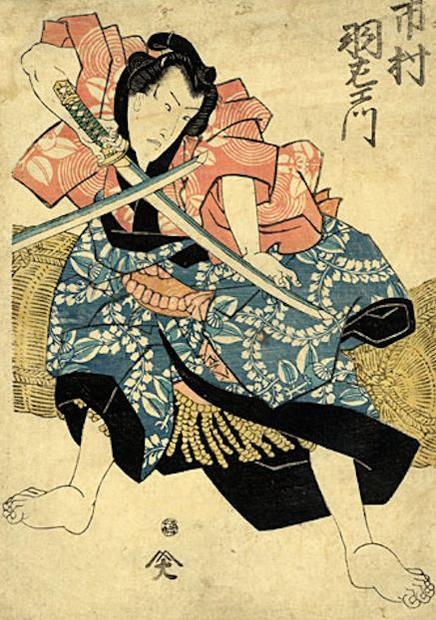 The Echizen region has a 700-year history of bladesmithing excellence. This samurai is from the Kamakura period (1192-1333).
historical image; origin unknown

Chiyozuru’s dream lives on today as Echizen remains home to a thriving blademaking industry. There are a few standouts among the many local blademakers, but there is only one company whose proprietary steel has won accolades around the world for its exceptional qualities. By global standards, Takefu Special Steel Company is small — it counts its employees by the dozen rather than by hundreds or thousands. But it enjoys a growing worldwide reputation for producing steel of legendary sharpness, the coveted VG-10.

VG-10 stands for V Gold 10, a truly fitting designation for what is widely recognized as the gold standard of superior-quality clad stainless steel. Cladding is the bonding of dissimilar metals, utilizing the strengths of each one to craft a stronger final product. In this case, chromium (15.0 percent), cobalt (1.5 percent), carbon (1.0 percent), molybdenum (1.0 percent), manganese (0.5 percent) and vanadium (0.2 percent) are used.

Although relatively small in terms of production, Takefu Special Steel Company’s VG-10 steel is used in between 60 and 70 percent of the kitchen knives (hôtcho) produced in Japan, including KAI Shun, Masanobu and Kagayaki brands, as well as in the blades of kitchen and other knives produced by such international companies as CHROMA Cnife, Richardson Sheffield, Fallkniven and Spyderco, to name but a few. 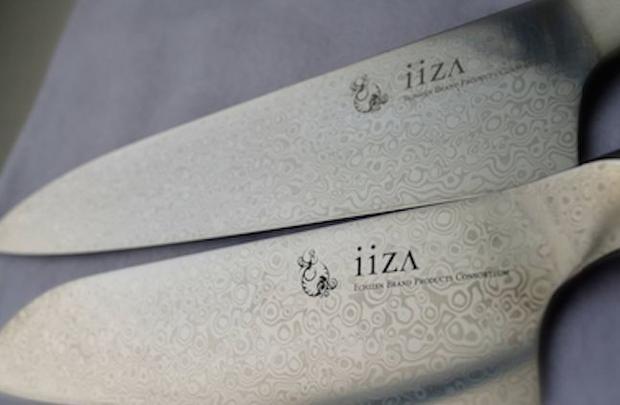 “There are a lot of steels out there, but the clad steel is unique,” says Mississippi knifemaker Robert G. Flynt, who produces custom hunting and other knives using VG-10. “And the multi-clad is very unique. There have been other clad steels around… but they’re not even comparable to what Takefu does with VG-10.”

South Carolina master bladesmith Jason Knight, proprietor of Knight Knives, calls VG-10 “an excellent steel for smaller blades,” and indeed, many outdoorsmen are raving about smaller knives made with the steel.

The enigmatic YouTube celebrity ‘nutnfancy,’ who is a survival instructor and, apparently, a Utah Air National Guard colonel, loves VG-10 small blades. To demonstrate its rust resistance, he left a Spyderco VG-10 blade lying in the snow overnight, along with a knife made from 8Cr13MoV steel. One of the blades showed signs of rust in the morning. The other did not. Can you guess which one “passed with flying colors,” according to ‘nutnfancy?’

“It’s one of my favorite steels,” he says in one of his YouTube videos. “It keeps an edge very well and has a really fine-edge characteristic to it. It’s extremely sharp and easy to sharpen in the field. It’s pretty much rust-resistant in tough conditions.”

Indeed, its ability to hold an exceptionally sharp edge and withstand oxidation have made VG-10 a top choice among knife enthusiasts. Value is another selling point. Bladesmiths also appreciate that it is relatively easy to create custom designs in the blade during temperament. But a word of warning to aspiring and neophyte knife makers — VG-10 is notoriously difficult to work, as Richard Airey, a founding member of the United Kingdom Knife Makers Association who crafts exquisite knives using VG-10, explained.

“There’s a steep learning curve on how to work VG-10 steel,” said Airey. “It demands a lot of precision… The cutting edge has got to be perfectly straight down the middle of the blade, otherwise you’ve got VG-10 on one side and you’ve got all the other multi-layers on the other die of your cutting edge.” 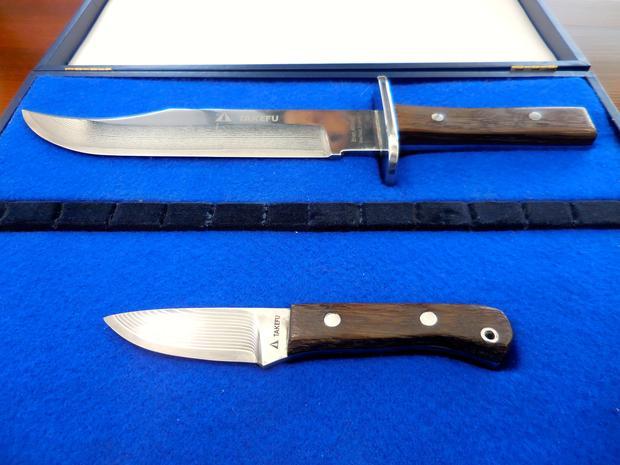 Airey, who has been working with VG-10 for about five years, loves bladesmithing with it despite the difficulty. He appreciates “the way you can manipulate the steel at the same time you’re grinding it, just by hammering the surface before you grind.” He is also impressed by the “localization of production” and the corporate culture at Takefu Special Steel Company, which he recently visited to celebrate the firm’s 60th anniversary.

“They’re all about respect,” he says of the Kono family and the company as a whole. “Respect in business, as well as in life.”

Three generations of the Kono family have strived to constantly improve the quality and range of products offered by Takefu Special Steel Company, which in addition to blades include industrial, medical, artistic and jewelry made from clad metals. Since opening for business in 1954, there have been only four presidents: Jiro Matsumoto (1954-1968), Iwao Kono (1968-1986), Michitsugu Kono (1986-2014) and now, his son, Michiro Kono. This familial continuity, along with a core stated mission to be a “humanism-oriented company,” has fostered a camaraderie and corporate culture that instantly impresses the Western observer. 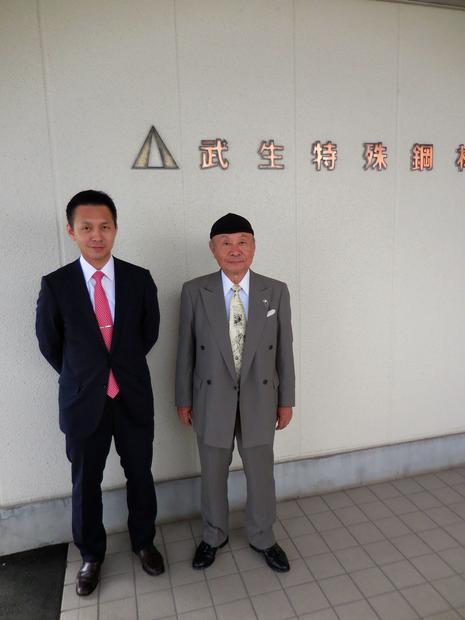 Takefu Special Steel Co. President Michiro Kono (L) and his father, Michitsugu Kono, who served as president from 1986-2014, represent the second and third generation of Kono leadership at the 60-year-old company.
Brett Wilkins

One of Takefu Special Steel Company’s latest projects is the exquisite iiza brand of kitchen knives (hôtcho), which are gaining fame and acclaim far beyond Japan’s borders. The iiza line, which includes high-end knives in the $300-$500 price range, is currently available in Europe, with plans to expand into the North American market currently in the works. Earlier this year, iiza’s Wabocho series won a prestigious iF Design Award in Germany, receiving recognition for excellence in design and outstanding design achievement.

For 35 years, VG-10 has been recognized as the true gold standard in clad steel. With its growing international presence, Takefu Special Steel Company is looking forward to enjoying many more years of success.