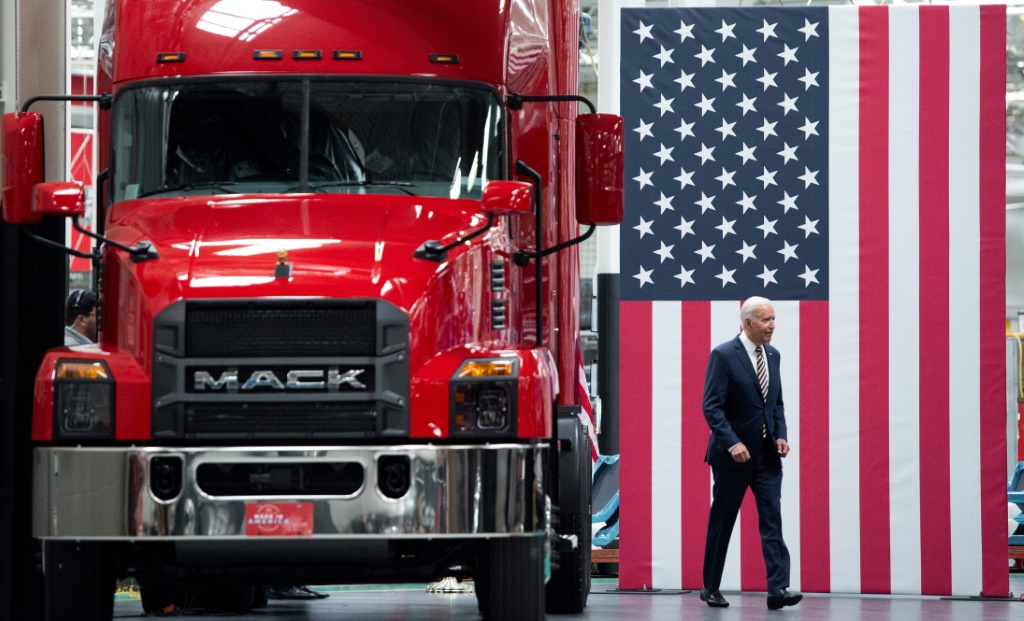 The US economy returned to its pre-pandemic level in the second quarter, data released Thursday showed, giving President Joe Biden a political win as Congress moves closer to passing a long-debated plan to improve the country’s infrastructure.

However the 6.5 percent annualized rate of expansion in the April-to-June period was slower than expected, and the Commerce Department report confirmed that inflation spiked as customers vaccinated against Covid-19 returned to businesses that suffered throughout the pandemic last year.

“Make no mistake: this growth is no accident, it’s a direct result of our efforts to deliver economic relief to families, small businesses, and communities across the country,” the Democratic president tweeted following the release of the data.

After taking office in January, Biden won passage of a massive $1.9 trillion spending bill to help the economy’s recovery from the historic downturn the pandemic caused last year.

However, the disruptions of the preceding months have made getting production and employment back to normal challenging, while prices have surged as businesses face renewed demand, shortages of components and supply chain delays.

Biden has called for even more spending to reshape the world’s largest economy, and on Wednesday evening, the Senate voted to advance a trillion-dollar infrastructure package that would pump historic levels of federal funding into fixing US roads, bridges and waterways as well as expand broadband internet and expand clean energy programs.

But Republicans who form a sizeable minority in the Senate could end up turning against the plan, while some progressive Democrats in the House of Representatives have warned they won’t approve it unless Biden’s ambitious $3.5 billion budget package including once-in-a-generation spending on health care, education, social welfare and climate action is also passed.

The pandemic caused a sharp downturn in the United States last year, with the economy ultimately shrinking 3.5 percent, its worst collapse since modern record-keeping began in 1946.

The country’s Covid-19 vaccination campaign along with emergency spending packages passed under both Biden and his Republican predecessor Donald Trump have kept it from suffering a worse downturn. And the IMF predicts that this year the US economy will expand seven percent.

In the second quarter, the Commerce Department said GDP climbed to $19.4 trillion, above its level in the fourth quarter of 2019, before the virus broke out.

“The peak may be behind us, but we expect the economy to carry strong momentum into 2022, with growth underpinned by strong consumer and corporate fundamentals and a favorable fiscal impulse,” Lydia Boussour of Oxford Economics said.

Forecasters predicted the economy would grow 8.5 percent, and Boussour blamed supply chain challenges for the undershoot, while calling the data a “key milestone in the recovery” and predicting strong economic growth later in the year fueled by consumer demand.

Second-quarter growth was above the 6.3 percent expansion in the first quarter, and driven by increases in consumer spending, exports and local government spending, the data said.

The expansion was undercut by the end to a government program to give loans and grants to small businesses hurt by the pandemic, and less overall federal government spending.

The data also showed the personal consumption expenditure (PCE) price index rising 6.4 percent in the second quarter from 3.8 percent in the period before, confirming that inflation is spiking as demand returns from its depressed levels a year ago.

Separate data released by the Labor Department showed new filings for jobless benefits falling last week to 400,000, seasonally adjusted, a decline of 24,000 from the week prior.

However, the four-week average of claims rose, while as of the week ended July 10, 13.1 million people were receiving jobless benefits, according to the data, up more than half-a-million from the week prior and despite some states moving to end special pandemic unemployment programs.

“Job growth should pick up and labor shortages should ease as near-term constraints — virus concerns, child-care issues and enhanced unemployment benefits — diminish,” she said. “But rising virus cases could be a headwind for the labor market and the economy.”

In this article:Economy, Pandemic, USA