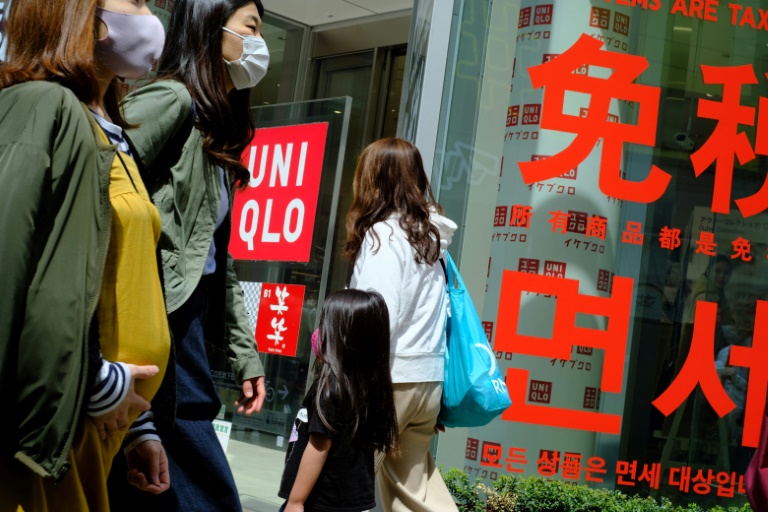 Fast Retailing, the operator of Japanese casualwear giant Uniqlo, revised its annual net profit forecast upwards on Thursday even as business in China is hit by fresh lockdowns.

China is a key market for Uniqlo, but consumer spending has been hampered as coronavirus cases surge in cities such as Shanghai, prompting authorities to impose tough lockdowns under the country’s zero-Covid policy.

Uniqlo operations in mainland China saw “a decrease in revenue and a large decline in profit” for the six months to February, Fast Retailing said, attributing the falls to curbs on movement.

But elsewhere in Asia, business was brisk, buoyed by strong performance in countries such as Malaysia where virus restrictions were eased.

These factors, coupled with what the group described as a “greater diversification” of its revenue streams, led to net profit for the first half jumping 38.7 percent on-year to 146.8 billion yen ($1.2 billion).

“Operating profit reached a record high, even after stripping out the impact of yen depreciation,” the company said as it logged 189.2 billion yen in operating profit in the first half, up 12.7 percent on-year.

Pandemic restrictions have not stopped Fast Retailing from aggressively expanding in Greater China, where it aims to open 100 new stores each year.

The war in Ukraine has also forced the company to strike a delicate balance between politics and profitability.

Moscow’s invasion has prompted the temporary closure of Uniqlo operations in Russia, where Fast Retailing now expects to “report a loss in the second half of fiscal 2022”.

This suspension was announced in March, in a U-turn from the Japanese firm’s earlier decision to stay open in Russia.

“Clothing is a necessity of life. The people of Russia have the same right to live as we do,” Fast Retailing president Tadashi Yanai initially said in comments that prompted calls for a boycott.