Exelon Corporation, the owners of the nuclear power plant in Middletown, Pennsylvania says they will have to shutter the plant unless the state can provide subsidies, according to NPR.org.

The power plant has been unprofitable for five years in a row. Exelon Corp announced in a press release last week that it failed to auction off future energy production from Three Mile Island for the third year in a row. 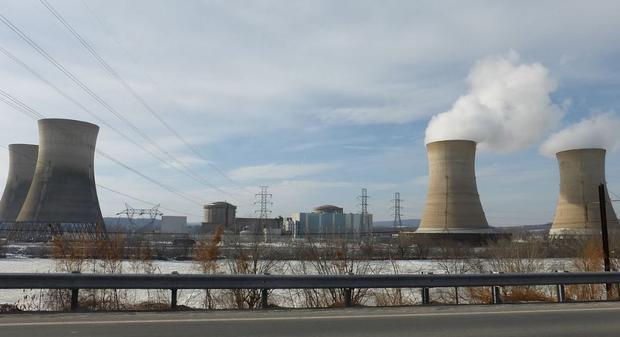 Viewed from the east, Three Mile Island currently uses only one nuclear generating station, TMI-1, which is on the right. TMI-2, to the left, has not been used since the accident.
Z22/Wikipedia
But nuclear and coal-fired power plants just can’t compete with natural gas or renewable sources of energy. There are 99 licensed nuclear power plants in the United States. Five has been shut down in the last five years.
Advertisement. Scroll to continue reading.

Exelon and other nuclear power plant operators contend that zero-carbon nuclear plants are much better than natural gas or coal at fighting climate change, a well-known point in their favor. But in Pennsylvania, there is opposition because of the potential for higher utility bills.

Opponents say nuclear power is riskier than other energy sources and more expensive than solar or wind energy. And environmental groups are mixed on their opinions, with some saying nuclear power is not a renewable. In the case of New York and Illinois providing subsidies, those states had to redefine “clean energy” to include nuclear power.