Goldman Sachs analyst David Tamberrino, in a research note on Thursday, notes that while Elon Musk may have access to new bonds, convertible notes or equity in funding its growth, this may have some downsides for investors, reports Automotive News.

“We see several options available to the company to refinance maturing debt and raise incremental funds, which should allow Tesla to fund its growth targets,” Tamberrino wrote. “However, issuing incremental debt (including priming current creditors with secured debt) may weigh on the credit profile of the company while issuing additional equity or convertibles at lower premiums would dilute current shareholders.”

And again, like a broken record, it seems the main issue facing Tesla is financing the funding of its production plans for the Model 3 sedan. The company is furiously cutting costs in an effort to avoid raising capital and has already eaten through over $1.0 billion in the first quarter of this year. 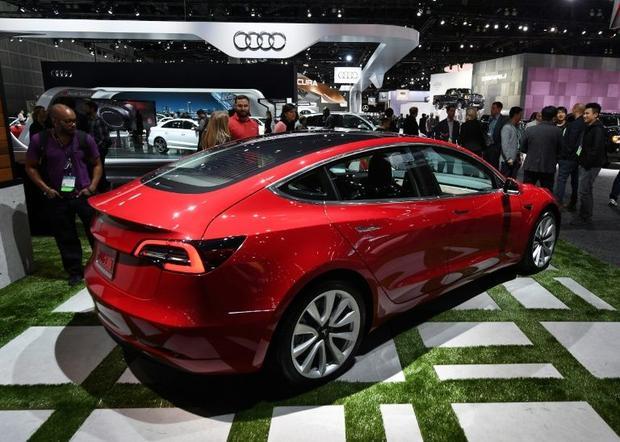 Tesla chief Elon Musk said a company reorganization aims to speed up production of the Model 3, a key to expansion of the electric carmaker
Mark RALSTON, AFP/File

Musk may be using his own shares as collateral
On March 14, Forbes cited a thorough reading of Tesla’s first quarter 2018 10-Q reports showed two important moves the company had made, noting that in one way, they were aggressive from an accounting standpoint, but could be construed as raising red flags in terms of financial stress. The moves were specifically:
1. Tesla created a special purpose entity to house the $546 million of automotive asset-backed notes (ABS) the company issued in February, and
2. Tesla added its Fremont facility to the collateral package underlying its revolving credit agreement.
On Thursday, Forbes said that a thorough look through Tesla’s proxy statements revealed something startling. By the end of 2017, Musk has used more than 40 percent of his Tesla shares as collateral for loans.

The 13.8 million shares Musk pledged as collateral amounted to a staggering $4.29 billion worth of Tesla stock based on TSLA’s closing price on December 29th. This information goes against all the hype over Musk’s purchase of 33,000 shares of Tesla stock last week – amounting to a 0.1 percent increase in his total holdings.

Needless to say, Tesla’s rampant cash-burn has a lot of investors worried, although Tamberrino said he didn’t think Tesla would have any problems raising the funds it may need, adding that he thinks Tesla has “several options” available to it, including issuing bonds and equity in the company.

Tesla is also betting on starting on its new gigafactory in China this month. The US firm’s Hong Kong subsidiary established Tesla (Shanghai) Limited on May 10 with a registration capital of 100 million yuan ($15.8 million), filings on the National Enterprise Credit Information Publicity System showed on Monday.

Tesla shares are down 8 percent this year, closing Wednesday at $286.48, giving the Palo Alto, California-based company a market value of $48.6 billion. Tesla had about $2.7 billion in cash at the end of the first quarter.

Tamberrino thinks Tesla stocks will fall further, tanking out at $195 per share within six months. He also recommends selling Tesla shares. Will Elon Musk have something to say about this pronouncement? We’ll see.