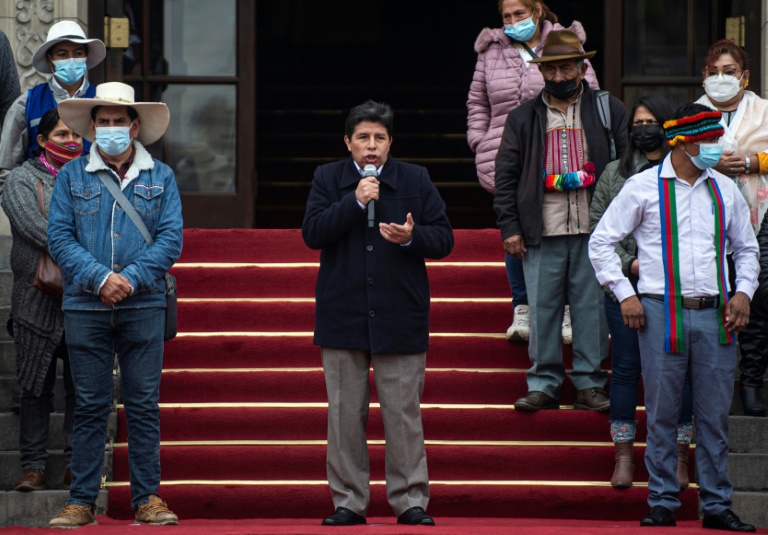 The announcement came after police this week raided the presidential palace in Lima, where Castillo resides, as well as his private home in the country’s rural north in search of his sister-in-law, who on Wednesday gave herself up in a related corruption investigation.

Castillo is already the subject of five other criminal probes for graft and for allegedly plagiarizing his university thesis, and has survived two impeachment attempts since taking office in July last year.

Peru’s public prosecutor has started a preliminary investigation into Castillo and his former Housing Minister Geiner Alvarado “for an alleged crime… in the form of criminal organization,” the public ministry, which oversees the work of the prosecutor, said on Twitter.

The investigation, it added, targets contracts awarded in the provinces of Chota-Cajamarca, where Castillo is originally from, and Cajatambo-Lima, north of the capital.

The arrests this week of Castillo’s sister-in-law Yenifer Paredes, businessmen brothers Hugo and Anggi Espino, and mayor Jose Nenil Medina of Anguia in Cajamarca, are related to the same probe.

The group is accused of participating in a network of corruption and money laundering that prosecutors allege was headed by the Peruvian president.

Castillo, serving a five-year term that ends in 2026, cannot be tried while in office.

Last week, a team of investigators visited Anguia and Cajatambo to collect information on public works contracts awarded to the Espino brothers, who are alleged to have had links with Castillo’s sister-in-law.

He has come under non-stop fire from right-wing political rivals seeking his impeachment, so far without success.

Opinion polls show that three-quarters of Peruvians disapprove of Castillo’s management of the country, which has seen three prime ministers and seven interior ministers come and go in just over a year.

Paredes, 26, lives with Castillo and his wife, whom she reportedly views as “parents.”

She is the fourth person in the presidential entourage to be investigated for alleged corruption.

The others include a nephew who served as an adviser, a former transport minister — both fugitives from justice — and Castillo’s former presidential secretary.