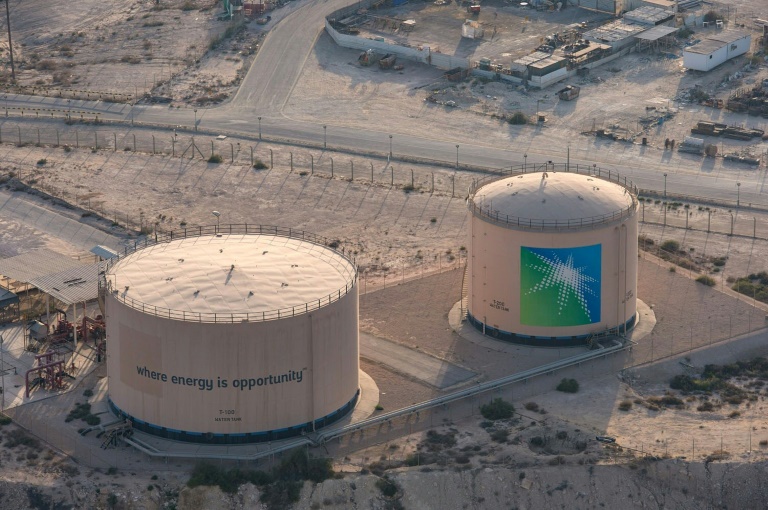 Saudi Aramco on Sunday posted an 82-percent jump in first quarter profits, buoyed by a global surge in oil prices that has made it the world’s most valuable company.

The announcement continued a string of recent positive economic news for Saudi Arabia, where a booming oil sector is fuelling the fastest growth rate in a decade.

Aramco’s net income of $39.5 billion was up from $21.7 billion compared with the same period in 2021, “primarily driven by higher crude oil prices and volumes sold, and improved downstream margins,” it said in a press release.

The latest financial results were published four days after Aramco dethroned Apple as the world’s most valuable company, with shares worth $2.42 trillion compared to Apple’s $2.37 trillion.

But the firm, the kingdom’s “crown jewel” and primary source of government revenue, has faced security challenges from the war which involves a Saudi-led military coalition against Yemen’s Huthi rebels who have repeatedly targeted the kingdom, including Aramco sites.

A two-month truce in the war has generally been holding since it started in April, but in 2019 Huthi-claimed aerial assaults on two Aramco facilities in eastern Saudi Arabia temporarily knocked out half of the kingdom’s crude production.

A March attack by the Huthis on facilities of the largely state-owned firm caused a “temporary” drop in production.

The net income for the first quarter was a record for Aramco since its initial public offering in 2019.

Also on Sunday, Aramco announced it was issuing 20 billion bonus shares to shareholders — one share for every 10 shares already owned.

A dividend of $18.8 billion will be paid in the second quarter, it said.

“Against the backdrop of increased volatility in global markets, we remain focused on helping meet the world’s demand for energy that is reliable, affordable and increasingly sustainable,” Aramco president and CEO Amin Nasser said.

In early May, Saudi Arabia reported its fastest economic growth rate in a decade, as a booming oil sector fuelled a 9.6 percent rise in the first quarter over the same period of 2021.

The world’s biggest oil exporter has resisted US entreaties to raise output in an attempt to rein in prices that have spiked since the Ukraine war began.

As the war got underway, Saudi Arabia and the United Arab Emirates stressed their commitment to the OPEC+ oil alliance, which Riyadh and Moscow lead, underscoring Riyadh’s and Abu Dhabi’s increasing independence from long-standing ally Washington.

Saudi Arabia’s GDP is expected to grow by 7.6 percent in 2022, the International Monetary Fund said in April.

Saudi Arabia has sought both to open up and diversify its oil-reliant economy, especially since Mohammed bin Salman’s appointment as crown prince in 2017.

Aramco floated 1.7 percent of its shares on the Saudi bourse in December 2019, generating $29.4 billion in the world’s biggest initial public offering.

In February, the kingdom shifted four percent of Aramco shares, worth $80 billion, to the country’s sovereign wealth fund — a move analysts saw as a possible prelude to further opening up the oil giant.

In this article:Aramco, Energy, Saudi