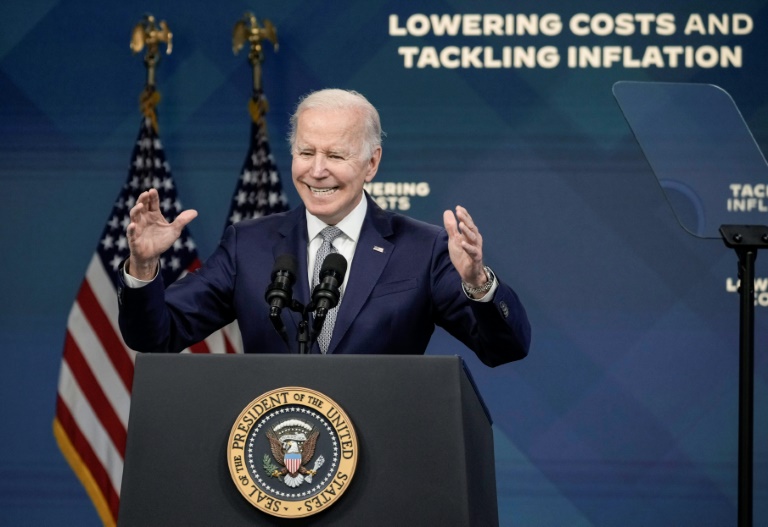 With surging prices undermining wage gains and hurting American families, US President Joe Biden said Tuesday fighting inflation is his top priority, but he may have limited tools to tackle the issue.

Biden, whose popularity has taken a hit amid the highest inflation in four decades, highlighted his efforts to combat the flare-up in prices while drawing a stark contrast with policies proposed by opposition Republicans.

“I want every American to know that I’m taking inflation very seriously, and it’s my top domestic priority,” Biden said at the White House.

“I know that families all across America are hurting because of inflation.”

The attack in late February caused a sharp spike in energy prices, and then began pushing food prices higher, as well.

“I know you’ve got to be frustrated… believe me, I understand the frustration,” the Democrat said, addressing Americans directly.

Calling out Republicans’ “extreme agenda,” Biden said that “they’ve done everything to slow down” his attempts to manage economic stresses.

Biden assured Americans that the Federal Reserve is acting to tamp down the inflation pressures, which he called the “top challenge” facing the economy.

The US central bank last week announced the biggest increase in the benchmark lending rate since 2000, the second hike since March as it moves to quickly pull back on stimulus put in place during the pandemic.

The world’s largest economy came roaring back from the economic damage inflicted by the Covid-19 pandemic, helped by bargain borrowing costs and massive government stimulus.

But with the pandemic still gripping other parts of the world, global supply chain snarls caused prices to surge for automobiles and other products, while housing prices soared amid a flood of new buyers.

And the conflict in Ukraine sent global oil prices above $100 a barrel.

US prices at the pump hit a new record on Tuesday, rising to an average $4.374 a gallon, topping the previous record set March 11, according to AAA.

US consumer prices jumped 8.5 percent in the 12 months that ended in March, and though economists think that may have been the peak, the rate is likely to remain high for months to come.

The Labor Department is set to release the April CPI data on Wednesday, which economists project will show a much more modest monthly increase, slowing the torrid annual pace.

Republicans have blamed Biden, saying his programs injecting billions of dollars into the US economy at the height of the pandemic spurred the inflationary cycle.

The White House says those packages effectively saved the country from a disastrous recession.

Addressing another politically sensitive aspect of the inflation puzzle, Biden said he was considering lifting trade tariffs imposed by his predecessor Donald Trump on China.

“We’re discussing that right now,” he told reporters, adding that “no decision has been made on it.”

Biden is under pressure from some quarters to remove the tariffs in a bid to cut the roaring inflation by making US imports cheaper.

Trump imposed the tariffs to punish allegedly unfair trade practices by Beijing. Lifting the measures would likely bring a political risk for the White House, which does not want to be branded as weak on China.

But Jason Furman, a former White House economic advisor under Barack Obama, said removing the tariffs is one of the few things Biden can do to directly address inflation.

“This would be the biggest step he could take,” Furman said on MSNBC.

In this article:Economy, Inflation, Joe Biden, Politics, US