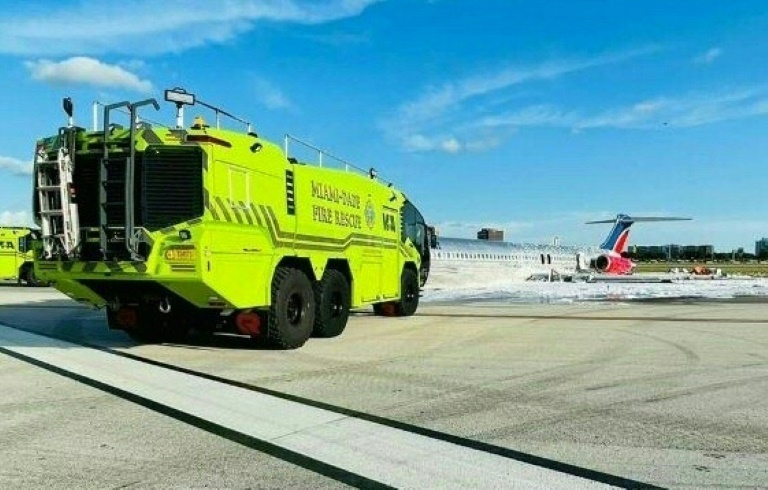 Investigators were headed to Miami Wednesday after a passenger jet’s landing gear collapsed and it caught fire as it touched down at the US city’s international airport, forcing 140 people to flee the burning and mangled aircraft.

Three people were hospitalized after the crash of Red Air Flight 203 late Tuesday, according to Miami-Dade fire officials, but no deaths or serious injuries have been reported among those on board.

Dramatic video footage showed people being evacuated from the McDonnell Douglas MD-82 aircraft, lying askew on the runway with its nose crumpled as thick black smoke billows from its body.

Red Air, a Dominican budget carrier which only launched in November last year, said the plane was arriving from Santo Domingo when it met with “technical difficulties.”

“Red Air #203 from Santo Domingo had its landing gear in the nose of the plane collapse, which seems to have caused a fire,” said a statement on the Miami International Airport’s Twitter account.

The National Transportation Safety Board (NTSB), the US government agency in charge of probing civil aviation accidents, tweeted that its team would arrive in Miami on Wednesday.

Red Air said there were 130 passengers and 10 crew on board.

In this article:Aviation, Crash, US