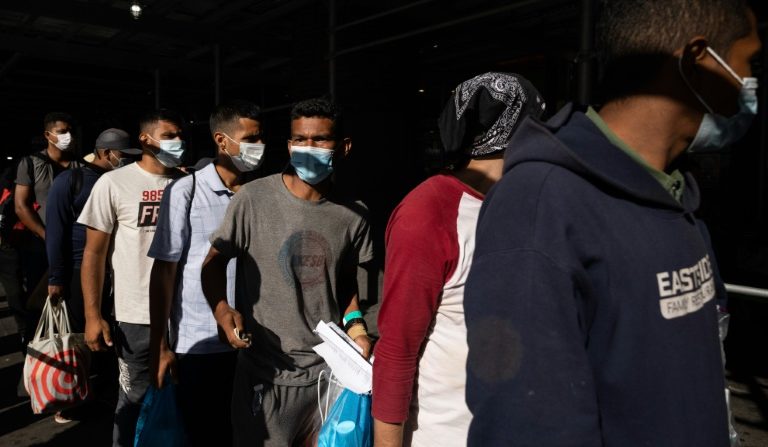 In a press release on Thursday, Mayor Eric Adams said the city plans to house asylum seekers in temporary, refugee-style camps — a move that further illustrates the huge strain a recent influx of migrants has put on the city’s shelter system.

Through an email put out by the press office, the city described the camps as “humanitarian emergency response and relief centers” and pointed to past examples of such centers with pictures depicting tents filled with rows and rows of cots.

The first of the emergency shelter facilities will consist of five tents set up in a parking lot at Orchard Beach in The Bronx. The location of a second planned center has not been determined.

The temporary structures would be weatherized and able to withstand the cold and snow that can come with a New York winter, officials said. And they will include a dining facility and medical space.

It will have enough beds to house up to 1,000 adults, who officials say will stay there for one to four days as they do initial assessments of their health and welfare before placing them into the city’s shelter system

The New York Times is reporting that as Texas Governor Greg Abbott sent buses of migrants directly to the city’s main bus terminal in August, New York’s mayor, Eric Adams, started opening new shelters at a frantic pace: nearly two dozen in six weeks. Fifteen just in the past week. It has not been enough.

“While other leaders have abdicated their moral duty to support arriving asylum seekers, New York City refuses to do so,” Adams said in a written statement. “This emergency response represents what we know must be done during this humanitarian crisis, as we continue to seek assistance from our federal and state partners to continue this work.”

New York is the nation’s only city that is legally required to provide a “right to shelter” for anyone in the city who needs a bed. Mr. Adams said last week he wants to reassess the ways in which the city satisfies that right, but he said turning away the migrants is not an option.