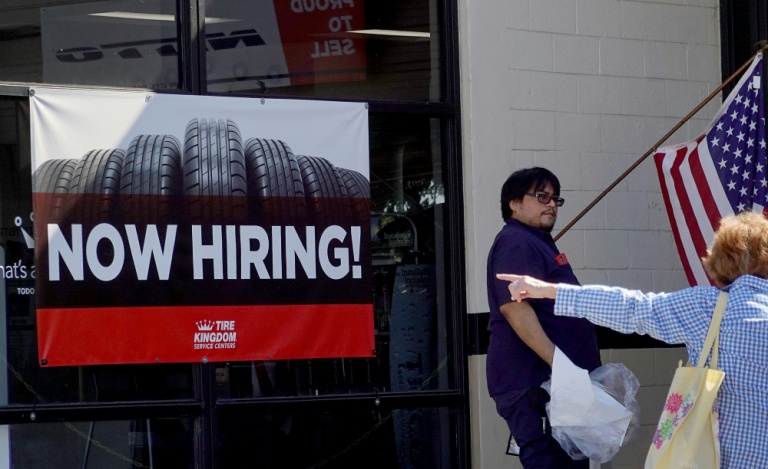 The US economy ended 2021 on a sour note with a worse-than-expected employment report that underscored the challenges awaiting President Joe Biden in the new year as the Omicron variant runs rampant and his legislative agenda stalls.

The world’s largest economy gained only 199,000 jobs in the final month of the year, the Labor Department said Friday, defying expectations for an increase of hundreds of thousands of positions fueled by the recovery from Covid-19.

Though a drop in the unemployment rate to 3.9 percent was welcome news, analysts warn the labor market may be in for some rough months to come as cases caused by the new variant surge and again complicate daily life.

“All of this is before Omicron, which is making lots of people sick and disrupting lots of businesses,” Mark Zandi of Moody’s Analytics tweeted, noting that the survey was based on data collected before the recent spike in infections.

“This highlights that the economy’s performance remains closely tied to the waves of the pandemic. Businesses are getting better at managing through the waves, but the pandemic is still calling the shots for the economy.”

The report was the latest setback for Biden after his marquee spending plan called Build Back Better was put on hold in Congress due to the opposition of a key lawmaker in his Democratic Party, and as a wave of price increases shows no sign of abating.

The most potent actor against inflation is the Federal Reserve, and although analysts say there was enough good news in this report for it to move closer to increasing interest rates as soon as March, the expected damage from Omicron could complicate the situation.

“In the context of a rapidly deteriorating health situation, the (first quarter) lull in economic activity will force Fed Chair Powell to walk a tightrope at the upcoming policy meetings,” Gregory Daco of Oxford Economics said.

After taking office in January, Biden promised better days ahead for an economy reeling from the damage done by the business restrictions and mass layoffs that marked the pandemic’s start, and the December jobs report showed progress was indeed made.

The number of unemployed people in the world’s largest economy dropped by 483,000 in December and by 4.5 million over the course of 2021, closing in on where it was before the pandemic, according to the data, while an average of 537,000 jobs were added each month in the year.

The fall in the unemployment rate also brought it closer to the 3.5 percent level of February 2020, before the economy collapsed.

A separate Labor Department household survey showed the number of employed people rose by 651,000 in December, a sign the report may have been stronger than the headline indicates.

The government also revised upwards the employment gains for October and November, saying they were 141,000 higher than previously reported.

But as business continue to struggle to fill open positions, the labor force participation rate, a closely watched metric of people either working or looking for jobs, was unchanged last month at 61.9 percent, after spending most of last year idling.

And disparities among racial groups remained, with the jobless rate for African Americans rising 0.6 point to 7.1 percent, while the rate for white Americans fell.

Biden managed to pass two major spending bills last year to fight the pandemic and upgrade the country’s infrastructure, but the spike in inflation fueled discontent with his administration.

Economists are debating the factors responsible for the price increases, including the role salaries have played. The employment data showed average hourly earnings rose 4.7 percent over 2021, not far from the rate of inflation.

The Fed has already signaled it is ready to raise rates, potentially as many as three times in 2022, which could tame the price spike.

The report “won’t trigger any changes in the Fed’s stance, but they make us more confident in our forecast that the first rate hike will come in March,” Ian Shepherdson of Pantheon Macroeconomics said.

In this article:Pandemic, US economy