Toronto and its politicians got a real ear-full on Friday when they found out that Sidewalk Labs’ small project, a 12-acre plot of land called Quayside with tech-friendly development, actually wants to develop 350 acres and draw profit from sources including higher property taxes and a share of developer fees, the Toronto Star reports.

Actually, all levels of government officials, from City Hall to Queen’s Park and Parliament Hill were left in a state of shock at the audacious plan that would develop and tax a huge swath of prime, mostly public city property.

“There is no way on God’s green earth that Premier Doug Ford would ever sign off on handing away nearly 500 acres of prime waterfront property to a foreign multinational company,” a senior official tells the Star. 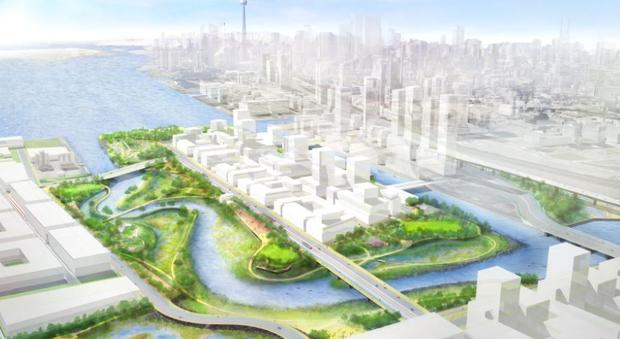 Toronto waterfront transformed with development of Quayside.
Waterfront Toronto
Toronto City Councillor Paula Fletcher, whose Ward 14 includes the Port Lands expressed her concerns about the proposal, reports Reuters. “I was terribly shocked because this was not within the scope of the project. I think it’s a big credibility problem for everybody.”

In Ottawa, a spokesperson for Infrastructure Minister François-Philippe Champagne said the deal with Sidewalk hasn’t changed. “The scope of the Quayside redevelopment remains confined to a portion of the Port Lands and does not exempt Sidewalk Labs from any of the normal planning or regulatory processes at any of the three orders of government,” wrote Pierre-Yves Bourque in an email.

But it gets worse
This whole mess came about after the Washington Post ran a story on Friday describing how Google had used anonymous holding companies and confidentiality agreements to buy up land across the United States in order to secure tax breaks.

Sidewalk Lab’s CEO Dan Doctoroff told the Star they plan to kick-start development in Toronto’s Port Lands by investing in underground infrastructure, and financing a publicly owned light rail transit line. He explained that the company would get its investment back by and make a “modest profit” from its share of developer fees, increased property taxes and increased land value that comes from its investment.

Of course, the profits from this revenue stream – estimated to be over $6 billion over 30 years – they plan on sharing with the city. “We’re prepared to take the risk up front of developing a model to help make that happen, and we’re prepared to essentially get paid back when we’ve demonstrated that it can be successful,” he said. “We don’t actually benefit until there’s successful development.”

Sidewalk spokesperson Keerthana Rang said: “We are excited about the proposal that is coming together and we think Torontonians will be too.” That remark may be stretching it a bit because the project has already faced opposition from locals over data privacy concerns.