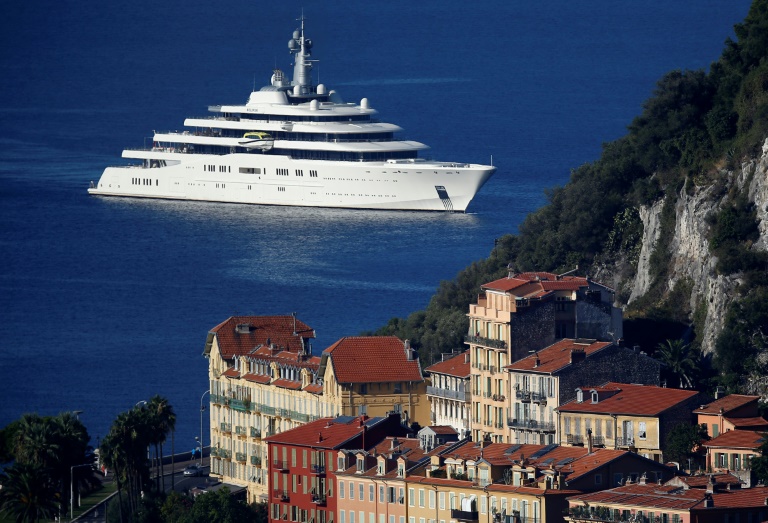 The secretive and idyllic Cap Ferrat peninsula on France’s Mediterranean Cote d’Azur has been marked by an influx of wealthy Russians since the 2000s but local businesses are now expecting to feel the pinch from sanctions following Moscow’s invasion of Ukraine.

“This will definitely have effects, lots of things depend on Russian clients,” said Jean-Francois Dieterich, mayor of the seaside Saint-Jean municipality — home to just 1,500 people in winter and with a 60-percent share of holiday homes.

“There’s widespread uncertainty, we don’t know how the conflict will turn out and the situation is unfavourable,” he added, while insisting that the local economy is not fully dependent on Russian cash.

Tucked between historic resort city Nice and the tiny principality of Monaco, Cap Ferrat saw an influx of Russians from around 2006, drawn by its wooded slopes and hidden coves.

Most of them were “demanding and in a hurry,” said Barbara Benassaya of Pisani Real Estate.

Paying up to 50 million euros ($54 million at current exchange rates) for a home, “they artificially inflated the market, they were prepared to over-pay for properties,” said Benjamin Mondou of Century 21 Lafage Transactions, another real estate firm.

Although Russia’s ultra-rich have bought up homes in other idyllic French summer spots — oligarch Roman Abramovich prefers Antibes, further west — there are more of them in Cap Ferrat than anywhere else on the Mediterranean shore.

Russian-owned properties include the former zoo, transformed into a modernist villa, or the Santo Sospir villa decorated by artist Jean Cocteau.

There are only a few visible signs of the Russians’ presence when walking around the port.

One wine bar bears a Russian name, while a vast palace is being built by a faceless Monaco-based property holding company called Kozak and one of the construction firms’ trucks bears a Cyrillic inscription.

Many Cap Ferrat property owners hide their connection to the town behind shell companies based in the Bahamas or Guernsey, making a habit of secrecy.

Documents of property holding firm La Chabanne Project bear the name of Alexander Ponomarenko, who stepped down as boss of Russia’s largest airport after being sanctioned by the European Union for close ties to Russian President Vladimir Putin’s entourage.

The company is building three homes on a four-acre site that it bought for 83.5 million euros in 2008.

With more than a year of work still to go “Mr Ponomarenko’s accounts have been frozen, the workmen will go ahead with what’s already been paid for and then the site will have to halt”, one contractor told AFP of condition of anonymity.

The situation would create a “significant shortfall” for his business, the contractor added.

The economy ministry in Paris declined to comment on whether the Chabanne Project site was one of the 30 Russian-owned properties it says have already been frozen.

French authorities have become cagier about their work tracking oligarchs’ cash since the March seizure of a yacht linked to Igor Sechin, boss of oil firm Rosneft.

People living and working on the Cote d’Azur fear that the Russians will now be unable to pay employees or cover bills, while frozen assets cannot be sold or rented — further limiting economic activity.

The Rotenberg family, oligarchs with ties to Putin who own the Villa Shoshana on Cap Ferrat, are already under American sanctions.

And the Nellcote villa — where the Rolling Stones recorded their 1972 album “Exile on Main Street” — now belongs to a holding company whose documents name Magnitogorsk steel boss Viktor Rashnikov, sanctioned by the EU as an “influential oligarch”, and his daughter.

It is unclear whether the villa is also frozen.

Although its shutters were closed and there was no answer at the security post, the automatic watering system was still working in a garden whose window boxes overflowed with flowers.

It’s too soon for the sanctions to affect guard firm SPG Securite, whose signs are visible on many of the gates bristling with cameras, as it says it takes payment quarterly or annually.

But they are “dramatic for everyone” said one construction specialist on condition of anonymity.

“My village has lost its soul, there used to be a butcher and a hairdresser around here and now there’s only estate agents.”

Nevertheless, “we shouldn’t criticise, it’s thanks to them that we can eat”, he added.

Estate agent Benassaya says that “on purchases between two and three million (euros) we get a lot of Russians who have nothing to do with all this, who even say sorry for the conflict” in Ukraine.

“They have trouble getting money out. Some have accounts in Monaco which makes things a bit easier”.

She has seen a string of cancellations, mostly on rental contracts for “large villas at 200,000 euros per month”.

Some of the Russians who live in Cap Ferrat year-round have begun covering up their country’s flag on car numberplates, local people said.

“All the cliches there might be about a Russian who made a fortune in the 2000s… tars a lot of businessmen with the same brush as oligarchs close to power,” said Edouard Deschepper, who is managing the reconstruction of Cap Ferrat’s Voile D’Or hotel for Russian developer Kirill Pissarev.

“As soon as people see ‘Russian’ in a request for a loan or to open a bank account, they’ll say ‘no’ nicely and without explanation,” he added, taking pains to note that Pissarev lives in London and has moved his wealth outside Russia.

On the other side of the conflict, Cap Ferrat also attracts many Ukrainians, including the country’s wealthiest man and Shakhtar Donetsk football club owner Rinat Akhmetov, who bought the Les Cedres villa for 200 million euros in 2019.

From his small boat, Arnaud Allary told AFP that his family had been “fishermen here for five generations”.

“Fifty years ago it was worth nothing, today I don’t have the money to buy a home and I pay 1,500 euros rent. I saw a little three-room flat sold above the port for 1.3 milion!”

When the Russians arrive in summer, “sometimes there are 80 yachts here and I have to fish further and further out”, he added.

Without them, though, he’s likely to see fewer orders for lobster.