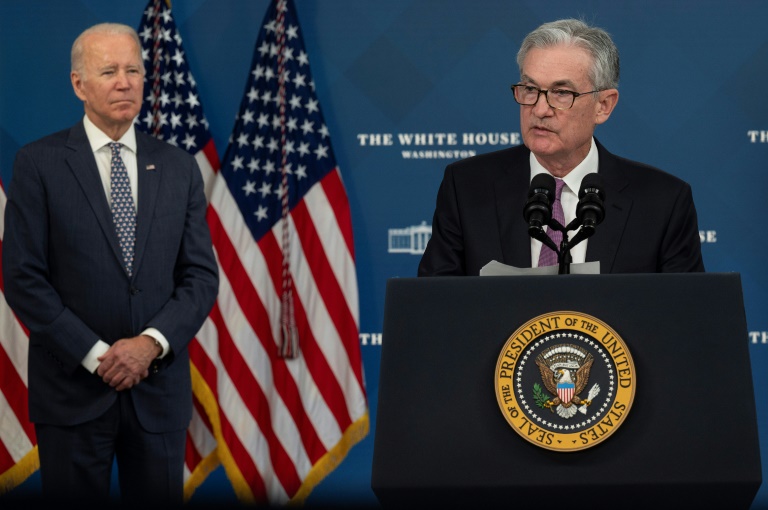 The Omicron variant of Covid-19 could slow the recovery of the US economy and labor market and also heighten uncertainty regarding inflation, Federal Reserve Chair Jerome Powell said in testimony released Monday.

Powell has consistently said the recent spike in inflation would be transitory, but acknowledged that the factors pushing US prices higher will “linger well into next year.”

The comments to be delivered to the Senate Banking Committee on Tuesday indicate the central bank chief is growing more concerned about this year’s price increases, which has put pressure on the central bank to raise interest rates more quickly.

The Fed slashed interest rates to zero in the early days of the pandemic and flooded the financial system with liquidity, which together with massive government aid helped to prevent a more damaging economic downturn.

While the US economy has “continued to strengthen,” the resurgence of the pandemic has dragged on the recovery, starting with the arrival of the Delta variant over the summer, he said.

The latest strain, which first emerged in South Africa, has jolted global policy and health officials as they scramble to determine if Omicron is more infectious or more serious, and whether current vaccines will be as effective.

Financial markets tanked on Friday amid fears the global economy would suffer a severe setback, but rebounded on Monday.

“The recent rise in Covid-19 cases and the emergence of the Omicron variant pose downside risks to employment and economic activity, and increased uncertainty for inflation,” Powell said.

“Greater concerns about the virus could reduce people’s willingness to work in person, which would slow progress in the labor market and intensify supply-chain disruptions.”

Those global snags have caused shortages of a variety of products, while pent up demand for goods also have contributed to a burst of price hikes.

Powell noted that inflation is running “well above” the Fed’s two-percent goal, with the central bank’s preferred price gauge seeing a surge of five percent for the 12 months ending in October.

“Supply chain problems have made it difficult for producers to meet strong demand, particularly for goods. Increases in energy prices and rents are also pushing inflation upward,” he said.

While the Fed still expects that “inflation will move down significantly over the next year as supply and demand imbalances abate,” Powell acknowledged the trend is “difficult to predict.”

Noting that rising prices hurt “those least able to shoulder the burden,” including Black and Hispanic families, he pledged to act to support the recovery and “prevent higher inflation from becoming entrenched.”

The Fed already has begun to pull back on its stimulus measures put in place to buffer the economy from the pandemic hit, but Powell has said policymakers can be patient before raising lending rates.

However, more Fed officials have signaled rates could be raised from zero in the middle of 2022, and possibly be followed by a second increase. Some private economists are predicting three hikes next year.

Treasury Secretary Janet Yellen, who is due to testify in the Senate alongside Powell, said the US recovery is on track, with hiring averaging half a million positions per-month since the start of the year.

But she warned lawmakers that failing to raise the US debt limit would undermine that progress.

“I cannot overstate how critical it is that Congress address this issue. America must pay its bills on time and in full. If we do not, we will eviscerate our current recovery,” she said in her prepared testimony.

Yellen earlier this month said the Treasury will run out of funds on December 15 unless Congress raises or suspends the cap on borrowing.

In this article:Federal reserve, Omicron, US economy