The nuclear power industry provides a clean and carbon-emission-free electricity source in the U.S. and while it may not be as cheap as natural gas or other renewable energy sources, the industry does fill a role in our having a balanced and dependable energy policy.

And unlike President Trump’s unlikely plans to resurrect the coal industry as an added source of energy generation, the president may be overlooking the nuclear industry and the thousands of jobs it generates in this country. Nuclear power has been hit with a sledgehammer with the recent bankruptcy of Westinghouse, a nuclear power company.

EIA analysis of nuclear industry
This all ties in with the EIA’s latest analysis of the nuclear industry today and the outlook in the very near future. Nuclear energy accounts for 20 percent of electricity generation in the U.S. today. According to the EIA’s 2017 Annual Energy Outlook (AEO2017) reference case, around 25 percent of the country’s nuclear capacity now in operation with no plans for retirement, will be retired by 2050. 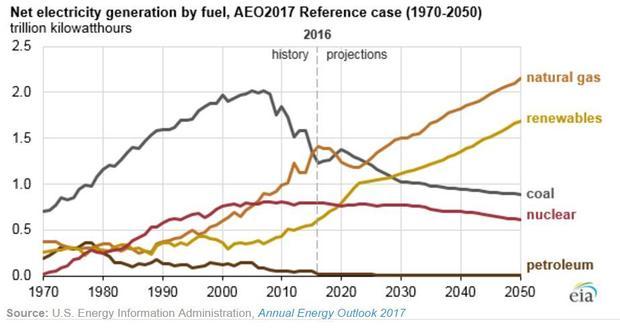 EIA
That’s quite a statement, no? But it has to do with the fact that most of the plants were built between 1970 and 1990. Keep in mind that these nuclear power plants were given 40-year permits, and this also means that those plants will need to have their permits renewed before 2050.

But here’s the problem – all the plants are already operating on the original 40-year operating license and 90 percent of them already have or have applied for, their 20-year license extension. So based on reference case modeling, the EIA does see some of the plants being retired and does not see a large number of new nuclear plants being built. Actually, the EIA only sees four reactors currently under construction and some uprates at existing plants coming online by 2050. 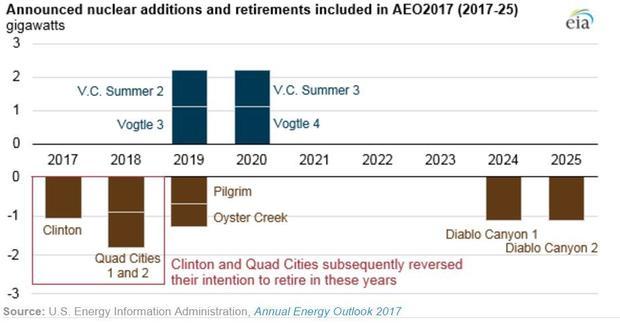 EIA
The plants “make up a disproportionately large share of generation compared with their share of electricity generating capacity,” EIA said in a research note. This is because generating capacity using other fuels is usually procured at much lower rates than nuclear units. So the EIA is forecasting nuclear’s share will drop from 20 percent in 2016 to only 11 percent in 2050.

The bottom line for U.S. nuclear generation doesn’t look that great. With low natural gas prices and the steady growth of renewables, nuclear’s stagnant load growth, and high capital costs are holding the industry back, according to Utility Dive.