In a press release on Sunday, the developers of the long-delayed, $8 billion, 42-inch wide natural gas pipeline cited uncertainties about costs, permitting, and litigation as the reasons for throwing in the towel on the project.

The 600-mile-long natural gas pipeline was supposed to go through the heart of Virginia to connect gas shale fields in West Virginia with markets in southeastern Virginia and eastern North Carolina. The cost was originally estimated to run $4.5 to $5 billion, but delays and litigation increased it to $8 billion.

“Despite last month’s overwhelming 7-2 victory at the United States Supreme Court, which vindicated the project and decisions made by permitting agencies, recent developments have created an unacceptable layer of uncertainty and anticipated delays for ACP,” Dominion Energy and Duke Energy said in the statement, reports CNN.

According to the Richmond-Times Dispatch, Richmond-based Dominion Energy will absorb about 53 percent of the $3.4 billion already invested in the pipeline as the company refocuses on electric and natural gas public utilities in Virginia, the Carolinas, and three other states powered by renewable energy sources. 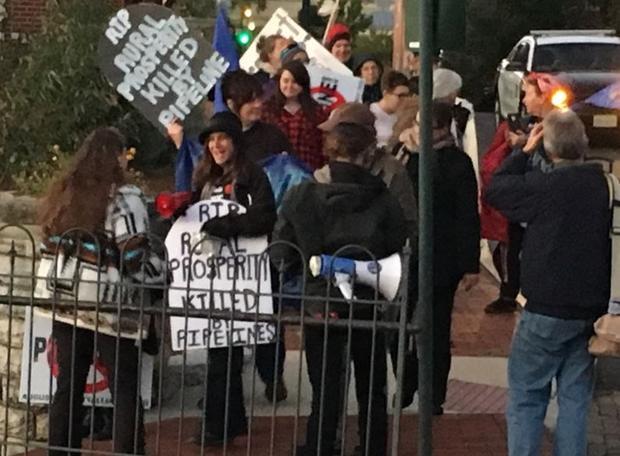 Dominion and Duke Energy both spent about $400 million on the pipe alone. “We regret that we will be unable to complete the Atlantic Coast Pipeline,” Tom Farrell, chairman, president and CEO of Richmond-based Dominion, said Sunday.

While dealing with repeated litigation from environmental groups and widespread opposition, primarily in Virginia, it was the federal court in Montana that killed the ACP after the court threw out a nationwide federal water quality permit that the Atlantic Coast Pipeline relied upon to cross hundreds of water bodies in its path.

The Atlantic Coast Pipeline is one of the priority infrastructure projects of the Donald Trump administration, and the administration has backed Dominion Energy throughout the appeal process. The Associated Press is rep[orting that U.S. Energy Secretary Dan Brouillette said in a statement the project was killed by the “well-funded, obstructionist environmental lobby.”

“The Trump Administration wants to bring the benefits of reliable and affordable energy of all kinds to all Americans,” Brouillette said. “Unfortunately, the same can’t be said for the activists who killed this project.”

Dominion announced separately on Sunday that it is selling its natural gas transmission and storage business to Berkshire Hathaway by the end of the year. Berkshire will take on $5.7 billion in debt from Dominion’s transmission and storage business. The sale includes more than 7,700 miles of gas pipelines and 900 billion cubic feet of gas storage.