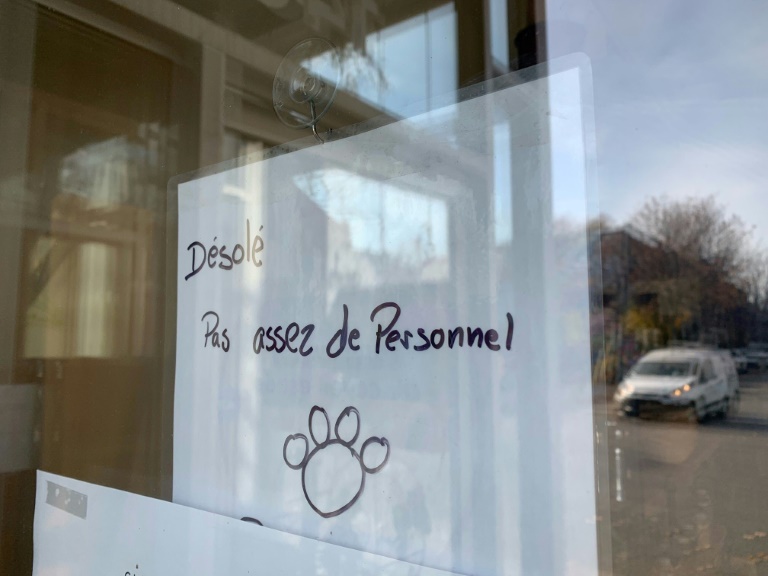 The signs of an unprecedented labor shortage in Canada are glaring: hospital emergency rooms closed because of a lack of nurses, restaurants skipping meals and fewer Santas in malls.

In Ottawa, a “Help Wanted” notice in the window of Corazon De Maiz restaurant — like those in storefronts across Canada — has gone mostly unanswered since the recent lifting of public health restrictions introduced 19 months ago to slow the spread of the coronavirus.

The end of Covid-19 lockdowns brought droves of customers to the capital city eatery, but with kitchen staffing levels down, the restaurant has been unable to meet the demand for burritos and tacos.

“We’re suddenly busier, but we’re having to close early because my wife and I are exhausted after working all day,” owner Eric Igari told AFP.

One new hire worked three hours and quit, saying the job was too hard for not enough pay, Igari said.

Studies by the government and industry associations found that up to two-thirds of Canadian businesses are facing worker shortages, and claim the deficit is limiting their growth.

The industries most affected are health care, food services, manufacturing and construction.

According to the latest from Statistics Canada, there were a total of 1,014,600 job vacancies in September, including 196,100 in food services and 131,200 in health care — double the numbers from two years ago.

Trevin Stratton, a partner at Deloitte Canada, said factors contributing to the shortfall include an aging population leaving the workforce and lower recent immigration due to travel restrictions — which Canada lifted in September.

Some sectors are adapting through the use of technologies such as increased automation in manufacturing, e-commerce in retail, or allowing staff to work from home.

But in others, “many workers might not necessarily yet feel comfortable working somewhere where their physical presence is required,” Stratton said.

This is particularly true in the restaurant industry, which also shed workers fed up with the cycle of lockdowns and re-openings throughout the pandemic. “They’re now looking for more stability,” Stratton said.

With Christmas just weeks away, the trend has also impacted the supply of Santa actors usually hired for photos with children on their knee at shopping malls or professional mixers.

Jeff Gilroy of Just Be Claus said he’s turned down 200 Santa gigs in Ontario. After large gatherings were banned last Christmas, he told AFP, “people are looking to have a Santa to make it a more festive Christmas.”

Catherine Lacasse of the Professional Santa Claus Agency of Quebec said her province has ample Santas, “but we’re struggling to find enough elves.”

“In health care, we’ve seen an exodus, particularly of nurses this year,” Stratton said. “Some of that has to do with the stress of the job right now.”

Lachine hospital in Montreal was forced to close its emergency room at night due to a “critical shortage of nurses,” said spokeswoman Gilda Salomone.

Several others, she said, “are experiencing a major labor shortage that is limiting the quality and access to care.”

But Jasmin Guenette of the Canadian Federation of Independent Business (CFIB), said this “isn’t an option for many small businesses still struggling to recoup pandemic losses.”

“We see things slowly getting back to normal, going out to restaurants, for example, and we think that means businesses are doing well. But that’s not the case. The impact of the pandemic was severe, and is still being felt,” he said.

Chez Mere-Grand restaurant in Montreal sought for 21 weeks to hire a cook and a barista. Its owner Romain Beiso explained that the hiring pool is smaller because many people now insist on a better work-life balance and job security found in other sectors.

“Our wages are not competitive because we cannot afford it,” he also acknowledged.

Over at Hotel Place d’Armes, manager Benoit Pretet worries about being short 25 staff going into the holiday season.

“The clientele is back,” he said, “but we can’t open all our rooms.”

In this article:Business, Canada, Employment, Labour