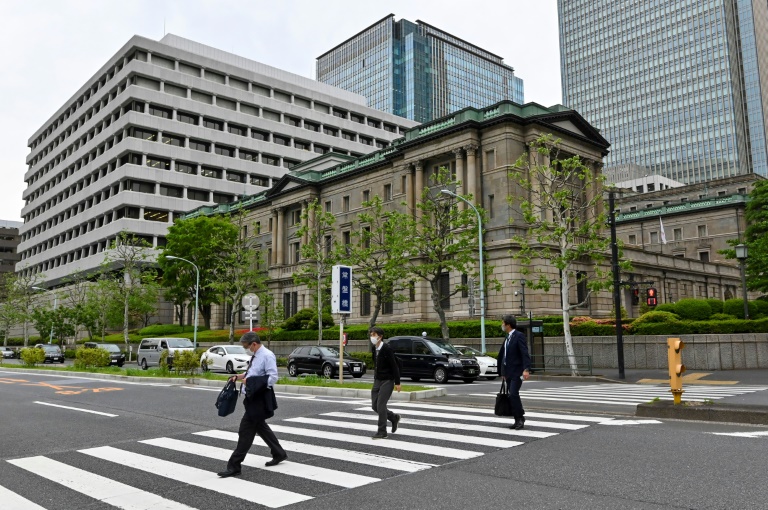 Japan’s central bank hiked its full-year inflation forecast on Thursday but cautioned that it sees rising prices, driven by a surge in commodity costs cause by the Ukraine war, as a volatile and temporary trend.

Despite climbing prices and a slump in the yen to a 20-year low against the dollar, the Bank of Japan left its ultra-loose monetary policy unchanged.

The bank revised upwards its inflation projection for the 2022-23 financial year to 1.9 percent — sharply up from its previous 1.1 percent forecast.

The figure, which excludes fresh food, is just below the bank’s longstanding two-percent target but the BoJ saw the rises as unsustainable and is calling for continued effort to achieve a sustainable cycle of dynamic economic growth.

Consumer prices are “likely to increase temporarily to around two percent — due to the impact of a significant rise in energy prices — in fiscal 2022”, it said Thursday.

“However, the rate of increase is expected to decelerate, because the positive contribution of the rise in energy prices to the CPI (consumer price index) is likely to wane.”

Excluding energy, however, prices were down 0.7 percent, reflecting what the bank says is the need for continued effort to achieve a sustainable cycle of dynamic economic growth that stimulates demand.

On Thursday, the bank’s policymakers left their inflation forecast for 2023-24 unchanged at 1.1 percent.

The BoJ said it now expects the economy to grow 2.9 percent in the current fiscal year, against its previous forecast of 3.8 percent. But it also predicted 1.9 percent expansion in 2023-24, from its previous projection of 1.1 percent.

The changes were down to factors including “a resurgence of Covid-19, the rise in commodity prices and a slowdown in overseas economies”, the bank said.

The two-day BoJ meeting that ended Thursday comes with the yen at its weakest level against the dollar since 2002 because of the widening gap between Japan’s loose monetary policy and the US Federal Reserve’s increasingly hawkish tilt.

The bank has suggested that the benefits of a weaker yen, particularly for major Japanese exporters, outweigh the disadvantages, but this messaging has become more difficult to sustain in the face of growing concern.

A weaker yen is particularly problematic for resource-poor Japan, which relies on energy imports, and in recent weeks politicians have expressed concern about the speed of the currency’s slump.

But no intervention appears on the horizon, though Prime Minister Fumio Kishida’s government this week unveiled a new economic package including cash handouts for low-income families and an expansion of fuel subsidies to cushion the impact of rising prices.

In this article:Currency, Economy, Inflation, Japan