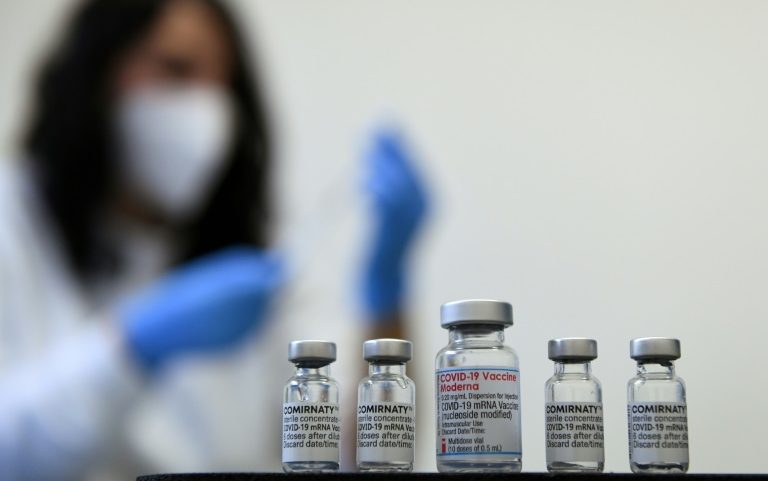 Asian markets mostly rose Wednesday while oil prices bounced as traders assess the outlook for the global economy after top drugs makers offered differing opinions on their vaccines’ efficacy against Omicron and the Federal Reserve took a hawkish pivot on monetary policy.

A mild recovery from the previous two days’ steep losses was turned on its head in the region on Tuesday after Moderna head Stephane Bancel told the Financial Times that existing vaccines might not be as effective against the new Covid strain owing to its multitude of mutations.

However, other drugmakers later said it was far too early to make a judgement, with the boss of BioNTech, which made a shot with Pfizer, said it was likely people would be protected against severe symptoms.

The less alarming outlook from the other firms helped settle nerves slightly while news that Moderna, Pfizer and the backers of Russian vaccine Sputnik V are already working on an Omicron-specific vaccine was also providing some solace.

With medical experts saying the full outlook for Omicron was still being assessed, analysts said markets would remain volatile.

“If by this time next week the medical gurus have concluded that existing vaccines are ‘sufficient’ and/or the Omicron virulence is milder than the current Delta variant, the market should bounce strongly,” said strategist Louis Navellier.

“Conclusions the other way could weigh heavily on the current bullish outlook for 2022,” he added.

“Such uncertainty will likely push some people to the sidelines who want to lock in the strong gains they’ve already booked for 2021.”

Sydney, which closed before the interview was published Tuesday, slipped slightly though losses were pared by data showing Australia’s economy shrank less than feared in the third quarter.

Crude — which was pummelled Friday and again Tuesday on fears about possible new lockdowns and their impact on demand — also enjoyed some advances with both main contracts up more than two percent.

The broadly positive performance across Asia came after Fed boss Jerome Powell put the central bank on the path to removing its vast financial support measures at a quicker pace than first flagged and lifting interest rates next year.

With prices surging at the fastest pace in three decades, Powell told lawmakers that “clearly the risk of more persistent inflation has risen”.

Having for the best part of the year insisted inflation was “transitory” owing to supply chain snarls and high energy costs, he for the first time omitted the word and said it was “appropriate, in my view, to consider wrapping up the taper of our asset purchases… perhaps a few months sooner”.

With the bond-buying programme put in place at the start of the pandemic — and key to the economic recovery — likely to end sooner, analysts are now suggesting the bank could lift rates possibly twice by the end of 2022.

“In all likelihood the Fed will now ramp up their pace of tapering and possibly complete it by March, which leaves the potential for a rate hike to finally fend off inflation,” said Matt Simpson at StoneX Financial.