Colonial shut down its main diesel and jet fuel line on Wednesday and the gasoline line on Thursday because of outages at its supply points and a lack of supply coming in from refineries.

Colonial is the second major fuel pipeline to close down in recent days. The Explorer Pipeline, with a capacity of 660,000 barrels a day, shut down its main fuel line from Houston to Tulsa, Oklahoma because supplies were drying up. Additionally, two East Coast refineries have already run out of gasoline. 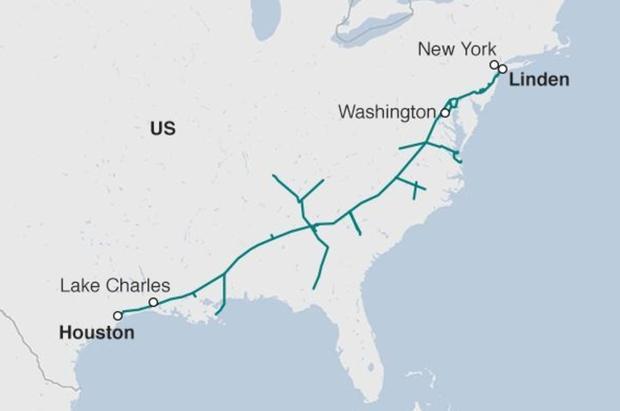 Map of the Colonial Pipeline.
EIA

Half of the 26 refineries that supply the 5,500 miles long Colonial pipeline are between Houston and Lake Charles, Louisiana. “Once Colonial is able to ensure that its facilities are safe to operate and refiners in Lake Charles and points east have the ability to move product to Colonial, our system will resume operations,” the operator said.

Colonial did note there are other ways to distribute fuel, like trucks, barges and other pipelines, so as to not disrupt the distribution system, however, pipelines are the safest way to move oil, gasoline, jet fuel and other petroleum products.

There are presently 13 refineries shut down or in the process of shutting down, including the nation’s largest, Motiva Enterprises LLC’s Port Arthur refinery. Motiva’s Port Arthur refinery can process 605,000 barrels of oil a day. Total SA’s refinery in the same area also had a power loss, which led to a shutdown, while Valero Energy Corp.’s nearby facility was also in the process of shutting down.

“I’ve never seen a situation this bad,” said one East Coast market source, according to Reuters. “Imports can’t make up for this. … This is going to be the worst thing the U.S. has seen in decades from an energy standpoint.”

As of Thursday, nearly 4.4 million barrels per day of refining capacity were offline. That amounts to almost 24 percent of all U.S. capacity. The EPA said on Wednesday that it had expanded fuel waivers for gasoline throughout the U.S. Southeast in anticipation of supply shortages.