Legislation introduced Monday in Alberta would give Alberta’s energy minister the power to require companies to get “permits to ship oil and refined products such as gasoline and diesel – as the government determines necessary.”

While Premier Rachel Notley told reporters the legislation is more about the province having control over its resources, the ulterior motive is to let British Columbia know that unless they back off with their opposition to the Trans Mountain Pipeline extension project, Alberta will hit them in their pocketbook.

But Bloomberg News is suggesting that if Alberta were to make good on its threat to halt shipments of oil, gas and natural gas to British Columbia, not only would Vancouver drivers end up paying more at the pump for gasoline, but so would drivers in Washington and Oregon in the U.S.

There is concern that the region’s refineries might end up facing curtailment of Canadian oil shipments down the Puget Sound Pipeline. Of course, B.C. will feel the effects of Alberta’s threat first. Over half of B.C.’s refined fuels, including gasoline, come from Alberta. 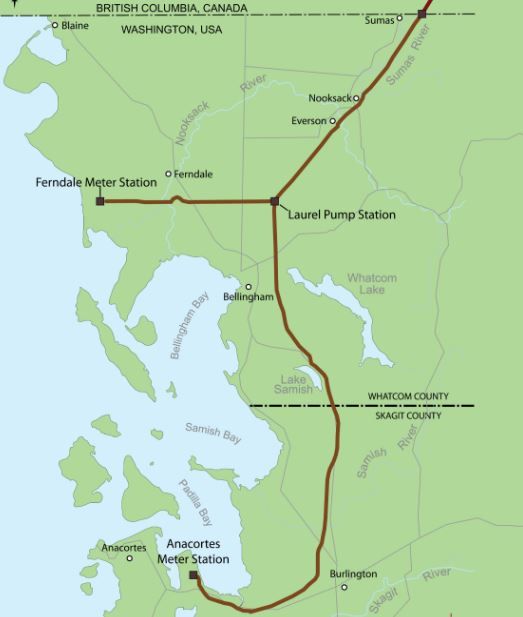 Alberta’s threat to halt the flow of oil could cause a curtailment of Canadian oil shipments down the Puget Sound pipeline.
Kinder Morgan
Advertisement. Scroll to continue reading.
Alberta also supplies Vancouver’s only refinery, Parkland Fuel Corp.’s Burnaby plant. “We cannot operate the refinery at full capacity without the Trans Mountain pipeline,” Annie Cuerrier, spokeswoman, said in an email.

Dan McTeague, a senior petroleum analyst at GasBuddy said B.C. would have to make up more than two-thirds of its fuel supply through imports if Alberta goes through with its threat. However, Vancouver’s import terminals “were not designed to replace, or compensate for the dramatic loss of that substantial amount of fuel,” he said.

Vancouver Airport Fuel Facilities Corp., which represents the carriers using Vancouver International Airport said the Parkland refinery supplies about 40 percent of the jet fuel used at the airport via a 40-kilometer (25 miles) pipeline that runs directly to the airfield. 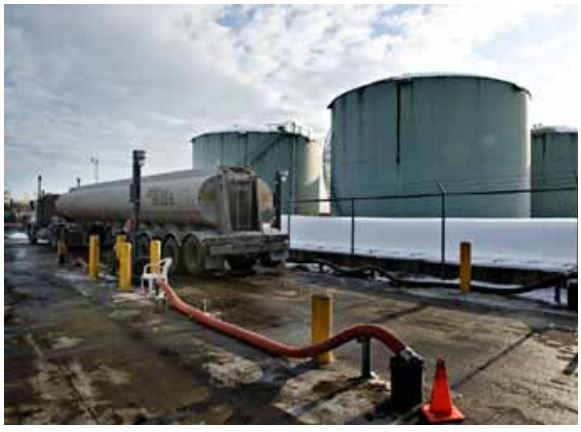 A shutdown at one of the refineries
servicing YVR would have a
significant impact on the airport
and the public it serves.
Vancouver Airport Fuel Facilities Corp.
Advertisement. Scroll to continue reading.
The rest of the airport’s fuel needs are imported from BP Plc’s Cherry Point refinery in Washington state by barge and tanker trucks. “If one of these refineries shut down for an extended period, airport and airline operations would be jeopardized,” it says on its website.

U.S. effects of Alberta’s legislation
A jump in the price of gasoline in Vancouver would be felt all the down the West Coast to Los Angeles, California if traders were to suddenly start shipping cheaper gasoline north to refineries in Oregon and Washington.

Washington State has five refineries with a capacity to process more than 600,000 barrels a day. They receive 35 percent of their crude supply from Canada. “You would have a spike in fuel costs but how long-term that lasts depends on how quick the Washington refineries could respond,” Mark Oberstoetter, lead analyst for upstream research at Wood Mackenzie in Calgary, said by phone. “It would take several months.” 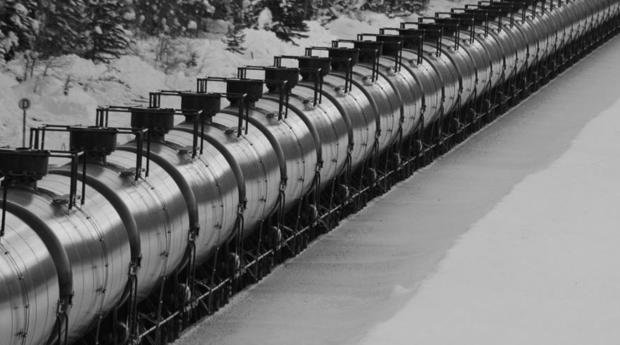 File photo: A westbound oil train rolls through Essex, Montana in January 2013.
Roy Luck (CC BY 2.0)
And looking at the larger picture, even though Washington has access to crude with seaborne shipments as well as Balkan crude sent by rail, extra crude supplies on the international market are sort of scarce, and “it will require quite a lot of logistical hoop jumping” to replace Canadian barrels, Sandy Fielden, director of research and commodities for Morningstar Inc. in Austin, Texas. “They could probably get the crude but it will have a big disruptive impact.”
Advertisement. Scroll to continue reading.

But if Notley thinks the province will come out on top for carrying through with the threat to turn the oil tap off, be assured, it will hurt Alberta, too. The province’s pipelines have been filled to capacity since earlier this year, owing to a surge in oilsands production. However, a halt in the pipeline flow would only exacerbate a bottleneck problem even further.

Canadian Association of Petroleum Producers spokeswoman Chelsie Klassen hopes the legislation will never have to be used. At first glance it could have economic consequences on our industry and Alberta’s economy, including potential employment depending on scope and timelines,” Klassen said in an email to the National Observer.